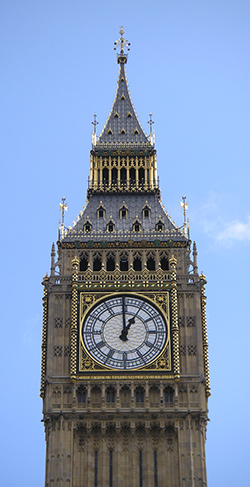 Big Ben is actually the name of the bell inside the Victoria tower, that was completed in 1859.

The chimes of Big Ben were first heard on the 11th of July 1859. It is arguably the most famous part of the clock tower attached to London's Houses of Parliament and was constructed under the reign of Queen Victoria I. Architect Charles Barry commissioned a fourteen-ton bell to lie within the clock tower. It would be the largest bell ever crafted and would ring every hour on the hour to the exact second of real time. It was also required that records of the ringing would be reported to headquarters at Greenwich twice a day to maintain accuracy. Historians believe that the bell cost about £572 to complete, a very large sum for the time. Unfortunately, the original bell was cracked beyond repair in 1857 when it was being tested, and had to be replaced.

Today, Big Ben is the nickname given to the thirteen-and-a-half-ton bell within the belfry of the Elizabeth Tower. Many believe that the bell is called Ben to honor Sir Benjamin Hall, the first commissioner of works on the project. To this day it is one of the most notable London landmarks and still chimes the hour to many tourists on a daily basis.

The great clock tower at Westminster in London was designed by clockmaker Augustus Pugin, his final design in a notable career. The structure was part of a larger project designed by Charles Barry to replace the previous palace that had been damaged by fire in 1834. Designed in a Gothic Revival style, the tower stands 315 feet high. Construction on the tower was completed in 1859, sixteen years after construction began, and five years behind schedule. The clock tower was renamed the Elizabeth Tower in 2012 to honor the Diamond Jubilee of Queen Elizabeth II. It has also been noted that due to a shifting in the ground and manmade construction projects underneath, the Elizabeth Tower has started to slightly lean towards to northwest. 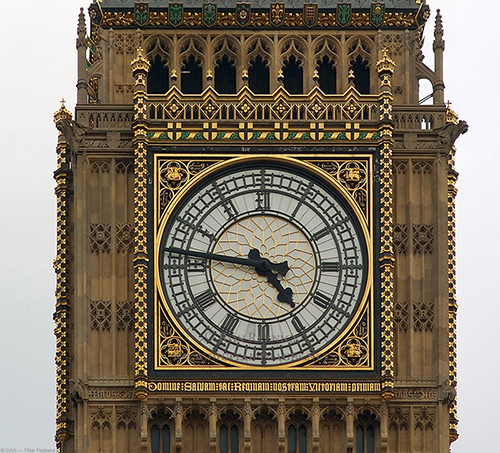 To adjust the time on the clock, penny coins are used to minutely change the center mass of the pendulum.

Augustus Pugin was the man that designed the clock and dials. Set in an iron frame that is 23 feet in diameter, the clock dials keep Greenwich Mean Time along London's River Thames. The clock face is composed of 312 opal glass pieces. The glass construction follows similar patterns to stained-glass windows, and some of the panels are removable so that the hands may be inspected. The numerals on the clock are two feet high, while the hour hands are nine feet long, and the second hands measure at fourteen feet. At the base of each side of the clock face, the Latin inscription reads "Domine salva fac Reginam nostrum Victoriam primam," which translates to, "O Lord, keep safe our Queen Victoria the First."

The clock tower is well known for being reliable and durable. Despite heavy bombing and damage, the clock still operated accurately and chimed the hour during the London Blitz during WWII. The clock is home to a double three-legged gravity escapement, an invention for the tower by Edward John Dent. The invention allowed for a better separation between the clocks mechanical system and the pendulum. The pendulum inside the clock tower is enclosed in a wind-proof area and beats every other second. To adjust the time on the clock, penny coins are used to minutely change the center mass of the pendulum, altering the rate of motion for the swinging pendulum. Just one penny can adjust the speed by .4 seconds per day. 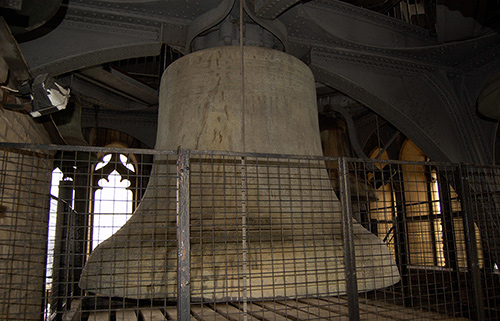 The bells can be heard every fifteen minutes, singing out a tune known as the Westminster Quarters.

Big Ben may be the biggest and most notable bell inside the clock tower, but it is not the only musical inhabitant. The belfry is also home to four other chimes. These bells can be heard every fifteen minutes, singing out a tune known as the Westminster Quarters. The tune is also sometimes referred to as the Cambridge Chimes, as homage to its origins. The four notes played by these chimes are G#, F#, E and B and are sequenced in twenty chime increments. Big Ben is the hour bell and also chimes on the note of E. The hour bell starts chiming exactly as the hour turns and emits a chime to represent every hour of the moment. For example, at five o'clock, five chimes will ring from the great bell.

The Story of Big Ben

Big Ben has even been reconstructed in the popular video game Minecraft.

Big Ben's clock tower is arguable the most famous landmark of the United Kingdom. The iconic symbol has been used in many television episodes and films to represent London as the setting. In 1978, the tower was represented in The Thirty Nine Steps during the famous scene where one of the characters hangs from the minute hand in an attempt to stop the clock from displaying the time. Big Ben also appears in notable films such as Thunderball, Peter Pan, Shanghai Knights, and V, for Vendetta. In an episode of Doctor Who, a damaged clock tower showcases that aliens have invaded London. The chime of Big Ben is also noted in popular culture as the identifying sound of the UK. He is the star of New Year's Day celebrations, as London rings in the New Year on the note of Big Ben. The chime of Ben is regularly broadcast live over BBC radio, so that the entire country (and in some cases the world) can hear the ringing of the time. The chimes are also used during ITV News special announcements and headlines. All of these chimes are not preset recordings, rather, they are sent from a permanent microphone that has been installed inside the clock tower.