A Brief History of the Hindu Calendar by TimeCenter 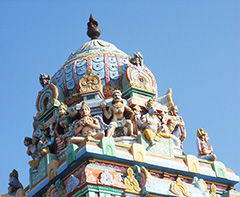 In 1957, a Calendar Reform Committee met to establish a standard lunisolar calendar to synchronize leap years with those observed by the Western calendar. The first standard Hindu calendar marked Saka Era, Chaitra 1, 1879 as the initial date of the newly reformed calendar system. In Western calendar terms, this date would be written as March 22, 1957.

According to the Hindu calendar, dawn tends to mark the beginning of the new day. Where the Western calendar divides the day into hours, the Hindu calendar counts the passage of time through fifteen muhurtas, each of which last approximately forty-eight minutes. The first two muhartas are typically used for spiritual time. Sunrise, noon, and sunset are considered to be the most important times of the day, and the chanting of the Gayatri mantra by brahmanas marks the occasions.

The Hindu calendar marks the days of the week by referring to them as the V?sara. In some variations of the calendar, the days of the week are written in traditional Sanskrit. Beginning with the day corresponding with Sunday, the days are as follows: Ravi, Soma, Mangala, Budha, Guru or Brhaspati, Sukra, and Sani.

The Hindu calendar marks twelve months by the same cycle as the lunar phases, approximately 29.5 days each month depending on celestial movement. The month is broken down into two fortnights, a Dark one (waning moon) and a Light one (waxing moon), each lasting fifteen lunar days. In some months, a day of the cycle may need to be dropped to correlate with a shorter lunar cycle. The first day of the month varies from calendar to calendar. Generally, in North India, the full moon marks the first day of the month, while in South India, the occasion is marked by the new moon.

The names of the months are the same in each version of the Hindu calendar. The names are assigned their appropriate lunar month based on the Zodiac signs, following the transition of the sun throughout the year. The names of the months and their corresponding Zodiac signs are as follows: Chaitra (Aries), Vaisakha (Taurus), Jyaistha (Gemini), Asadha (Cancer), Sravana (Leo), Bhadrapada (Virgo), Asvina (Libra), Kartika (Scorpio), Agrahayana (Sagittarius), Pausa (Capricorn), Magha (Aquarius), and Phalguna (Pisces).

For the Hindu calendar, the Makara Sankranti marks the beginning of a new year, as the sun passes into the zodiacal territory of Capricorn. It is most commonly measured as the day after the new moon during the month of Chaitra. The calendar divides the year into six seasons. The years are numbered in eras, with the most commonly used numbering according to the Vikrami Era.

The numbering of the years also correlates to the epoch of the current era. In terms of the Western Calendar, the epoch of the current era is marked as January 23, 3102 BC. This date is chosen for spiritual reasons, as the date revered for the eternal return of Sri Krishna. The numbering of the years counts the years that have elapsed since the moment Sri Krishna's return.

Hindu years also have specific names. There are sixty names corresponding to individual years, and they are rotated on a cycle as each year passes. The first year, called Prabhava was marked at the epoch of the calendar, and every sixty years, another Prabhava is observed.

The Making of the Hindu Calendar

Regional Varieties of the Indian Calendars

Each Day of a Week Dedicated to a Particular Hindu God

Names of the Months in the Indian Calendar

The Festivals of India