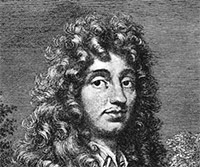 Christiaan Huygens, the inventor of the pendulum clock.

The pendulum clock is one of the most recognizable types of clocks. Many consider it to be a classic or antique timekeeping device. Invented in 1658 by a Dutchman named Christiaan Huygens, the pendulum clock was known for being the most accurate time measurer until newer technology was invented in the 1930's. Huygens was a scientist born in 1629 to a very rich and influential family. He boasted a very impressive career in math, science, and astronomy. Among inventing the pendulum clock, he is also know for his studies on Saturn's rings and discovering the moon Titan. In his life, Huygens was surrounded by some of the most brilliant minds of the age; Galileo Galilei and Rene Descartes were counted among his friends.

Christiaan Huygens's work in horology was one of the most notable accomplishments of his career. The advent of the pendulum clock allowed for timekeeping that was more accurate than it had ever been before. Prior to its inception, timekeeping was only accurate to about fifteen minutes a day. The pendulum clock allowed that margin to be shrunk to about fifteen seconds.

Salomon Coster, a clockmaker, was given the task of constructing the first pendulum clock from Huygens's design. Huygens was inspired by his friend Galilei's discovery of isochronism as it pertains to the swinging of pendulums. It is widely believed that Galilei first had an idea of a pendulum clock about twenty years before Huygens was able to design a working model. As the pendulum clock rapidly gained popularity, clockmakers tried to create enhancements in the design. In 1673, Huygens published Horologium Oscillatorium, in which he discerned that wider swings of the pendulum decreased accuracy. This pronouncement helped lead clockmakers to create mechanisms to help control and regulate the design of the pendulum clock. By 1690, accuracy was close enough that minute hands were regularly being added to the clock face. Over time the pendulum clock was improved and innovated with various escapements to improve accuracy. Until the quartz clock was invented in 1927, the pendulum clock reigned as the most accurate measurement of time for two hundred and seventy years.

There are five parts that are standard on all pendulum clocks. Every clock needs to have a pendulum and a power source. The power source can be either a mainspring, or a weight on a chain or cord to turn a sprocket device. Pendulum clocks must also have a gear train to help assist the speed of the power source to be used by the pendulum. Escapements may vary, but each clock must have one. It is the job of the escapement to regulate the timing of the pendulum's swings. The escapement also releases the wheels of the gear train, which accounts for the ticking sound associated with pendulum clocks. Finally, all pendulum clocks require a dial that indicates how much time has passed. The dial is usually displayed as what is known as the clock face and hands. Some pendulum clocks may have more advanced functions of timekeeping called complications. A striking train complication is one in which a chime strikes on every hour. Some pendulum clock faces may have dials that indicate other horology data such as moon phases, calendar dates, and equation of time.

Spending over two hundred years as the most advanced clock, it is understandable that pendulum clocks become a status symbol for society. Over time, the casings, faces, and styles of the clock's construction began to evolve, particularly by different cultures. In the United Kingdom, a style of pendulum clock called the Act of Parliament Clock or Tavern Clock was typically found inside inns and pubs. They were plainly designed and hung on walls. In 1802, Simon Willard of Massachusetts patented the banjo clock. One distinct characteristic of the banjo clock is that it indicated time only by the hands and dial. The cartel clock style was very popular in France, during the reigns of Louis XV and Louis XVI. Characterized by an ornate cartouche shape and gilded in bronze, cartel clocks also became popular in Austria and Scandinavia. Longcase clocks, more commonly known as grandfather clocks, are the most recognizable styles of pendulum clocks. William Clement is the man credited with the invention of this style in 1670. Another popular style of the pendulum clock is the cuckoo clock. In the home, mantel clocks became decorative items usually placed on shelves or above the fireplace. Invented in France during the 1750's, this style is created in an exceedingly lavish fashion, usually made of porcelain or wood.

A Poster of Christiaan Huygens

How the Grandfather Clock Got Its Name