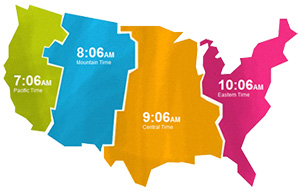 There are six time zones in the US, four in the mainland, and one each for Hawaii and Alaska.

Given the nature of how the Earth turns on its own axis, and the relation of different parts of the world to the sun in the sky at any given moment, time zones are necessary as a way to standardize the measurement of time. In order for noon to be the moment when the sun is most directly above a given place, time zones help in making sure that that is possible. There are twenty-four time zones around the globe, each one correlating with the fact that there are twenty-four hours in one day. Each time zone differs in one-hour increments, until an entire day is filled. As a general rule, the time zones are catered to the natural boundaries in each respective territory.

The need for a standardized measurement of time came about with the development of the railroad system. With early time keeping being measured by the progress of the sun as it corresponded to latitudinal lines, it became problematic for the scheduling of railway transport. The problem was particularly apparent in North America where the United States and Canada operated transcontinental railroads that traveled thousands of miles in a short amount of time. Around the year 1863, it is believed that Charles F. Dowd came up with the idea of implementing time zones in the United States for the American railway system, while teaching a class to his teenage students at the Temple Grove Ladies Seminary. In 1870, Dowd published "A System of National Time for Railroads," a pamphlet in which the idea was presented to the New York committee of railway superintendents. In his proposal, Dowd suggested each zone differ by one hour, each fifteen degrees longitudinally apart, with the central meridian being called Washington meridian. In 1872, Dowd altered the proposal to allow for natural geographic borders. After consideration, Dowd's proposal was not accepted by the railroads, rather, they opted to follow a system designed by William F. Allen. In Allen's "Traveler's Official Railway Guide," he proposed that rail stations in certain major cities serve as the border between time zones.

Why Do We Have Time Zones? - PDF

It was in 1878, when a Canadian railway engineer named Sir Sandford Fleming proposed a solution to the growing problem of worldwide time zone disputes. Fleming called for an idea in which the globe would be divided into twenty-four equal zones, separated by fifteen degrees longitude. The logic behind the separation of fifteen degrees came about mathematically because the earth spins on a three hundred and sixty degree axis. On November 18, 1883, United States rail companies adopted Fleming's idea.

All About Time Zones

In 1844, Washington, DC, hosted an International Prime Meridian Conference in order to determine the centralized location for the start of the measurement of time zones. The agreed upon location for the Prime Meridian is in Greenwich, England, thus marking the sport as zero degrees. The time zone was named Greenwich Mean Time, and still goes by that name today. Greenwich Mean Time is also referred to as Universal Time.

One hundred and eighty degrees away from the Prime Meridian lays the International Date Line, where those travelling across the border pass from one date to another. It is located in the Pacific Ocean. The location is highly convenient, as it doesn't pass through the middle of a country.

What is Universal Time

Twice a year, Daylight Savings Time is observed throughout the time zones of the world.

Benjamin Franklin, George Hudson and William Willett, suggested the idea of Daylight Savings Time in 1784. The men thought it would be a way in which energy could be conserved. The Germans brought the idea into action during World War II, as a way to save money on burning coal.

Modern Daylight Savings Time was suggested in 1907. While all countries do not observe Daylight Savings Time, most of them do adopt the practice of moving clocks either forward or backward an hour, depending on the time of year. Clocks are moved forward an hour in the month of April, and are moved back an hour in the month of October. This allows for the time zones to experience the most amount of daylight due to Earth's tilt during rotation around the sun. Most countries in close proximity to the equator do not practice Daylight Savings Time, as their proximity to the center of the Earth does not result in much change of daylight from season to season.

A History of Daylight Savings Time