Features of the Astronomical Clock by TimeCenter.com 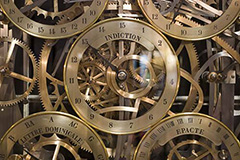 The gears in the Strasbourg Cathedral Astronomical Clock

By general definition, an astronomical clock is one that not only tells the time of the day, but also shows astronomical information. This astronomical data could be related to the location of the sun and moon, for example, the moon's current phase in the lunar cycle, the sun's location as it pertains to the ecliptic, or the zodiac climate showcasing the months of the year. Some astronomical clocks may also show a rotating star map for tracking the movement of the stars in the sky. Another feature of the astronomical clock is that it can show sidereal time, which is used by astronomers to monitor the direction in which telescopes should be pointed to study various stars. Sidereal time helps measure the rate of the Earth's rotation based on the position of the stars, and it is used to describe the amount of time in one day. Astronomical clocks tend to be geocentric, that is, they represent the solar system with the earth at the center of everything.

Richard of Wallingford, St. Albans is credited for developing an astronomical clock in the 1330's. Giovanni de Dondi is also credited for developing an astronomical clock in Padua sometime between 1348 and 1364. Both men developed clocks that were considered to be masterpieces of the time, however, neither clock exists today. Fortunately, details of their design were recorded for use by future generations. Modern day replicas of these two advanced clocks have been created. Features of Richard's clock include information about the position of the sun, moon cycle, planets, and stars, as well as a wheel of fortune. The clock also features a gage to note the tide of the River Thames at London Bridge. Giovanni's clock design is a little more complex. Called the Astrarium, the clock showcases a seven-faced construction that includes one hundred and seven moving parts. This version of the astronomical clock displays the various positions of the sun and moon, as well as five of the planets in the solar system. It also notes certain religious feast days. Given the grand scale of both designs, coupled with the limitations in technology, these early forms of the astronomical clock may not have been as accurate as desired when first constructed. They could not be used with complete reliability. Their earliest function was to be used for demonstration purposes as a way to impress technical skill and wealth. In the eighteenth century, the population became increasingly interested in astronomy, and the astronomical clock gained more of a desire and presence in culture. Advanced technologies allowed for better accuracy and the clocks were used as intended, for astronomical calculations.

Features of a Standard Astronomical Clock

Each astronomical clock is unique to its designer, but there are a few features that they all share. For starters, astronomical clocks show the time of day with a twenty-four hour dial on the outside edge. Using Roman Numerals, the clock mirrors from I to XII on both ellipses of the half circle, with noon laying at the top and midnight at the bottom. A golden ball or representation of the sun sits at the end of the time hand, indicating the current time. To represent the year, astronomical clocks use the signs of the zodiac to represent their respective months. The zodiac signs are generally displayed inside the time dial. To represent the Earth's tilted rotation on the orbital plane, the clock features a projection of its movement off center in this area of the clock. The dial extends from the elliptical projection and is used to track the movement of the earth around the sun. This dial operates on sidereal time, and therefore marks one full day as twenty-three hours and fifty-six minutes. As a consequence of following sidereal time, the elliptical hand will slowly move out of sync with the hour hand.

General astronomical clocks also showcase the age of the moon on a ring ranging from one to thirty. When the moon is new, it rests at zero, waxes at approximately fifteen, and wanes by numbers twenty-nine or thirty. The clocks also feature unequal hour lines. These hour lines represent the differences in summer and winter hours with regards to the amounts of daylight. Since the daylight hours change by seasons, astronomical clocks make note of this using curved lines. One other common hand on the astrological clock is the dragon hand. Approximately every nineteen years, the dragon hand makes a full rotation around the ecliptic dial, meaning the dragon hand, new moon, earth, and sun are all on the same plane. When this occurs, an eclipse will be visible from earth.

One of the most famous astronomical clocks can be found in Prague, at the Old-Town Hall. The Prague Orloj, as its called, dates back to 1410 and features religious representations as well as the standard structures. Since it's creation the clock has undergone several renovations to ensure that it always works. As per local superstition, when the clock no longer functions, the city of Prague will experience misfortune.

Another city in the Czech Republic is home to a famous astronomical clock. A very rare heliocentric clock, which shows the sun as the center of the universe, was on display in the town square at Olomouc. Constructed in 1422, the clock was renovated about every one hundred years. During WWII, the Nazi army damaged the clock, leaving fragments behind, which are now on display in the museum at Olomouc. A reconstruction of the original clock was commissioned with alterations replacing religious figures in favor of members of the proletariat.

An astronomical clock sits inside the cathedral at Beauvais, France. Constructed over four years, beginning in 1865, this clock has over ninety thousand working parts, with fifty-two dials. The clock not only measures such moments as sun and moonrise, sun and moonset, lunar phases, solstices, and tidal hours, it also features a Celestial City that enacts the Last Judgment at the striking of every hour.

Copenhagen, Denmark is home to an astronomical clock that took fifty years to be designed. Initial construction began in 1948, with completion in 1955. The clock resides in the city hall, within a glass cabinet. Jens Olsen, a clockmaker by trade and an astronomer by hobby, was the mastermind behind this clock.

Image of the Olomouc Astronomical Clock