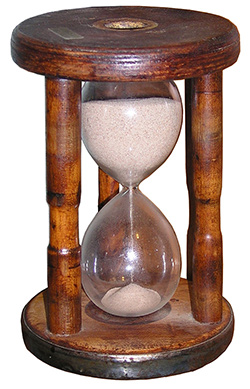 Hour glasses was originally designed to let one hour pass, but has since then been used for other durations, especially in games.

History is a bit fuzzy on the invention of the hourglass. Some believe the idea can be credited to a French monk named Liutprand in the eighth century. It wasn't until the fourteenth century, however, that the hourglasses become a commonly used tool for measuring time. Written records began showing evidence of hourglasses in the 1300's, originating out of medieval Europe. Most accounts are from ship logs, where hourglasses were used because the rocking motion of the ship did not alter the mechanical workings of the hourglass. Many considered it to be the most accurate way to measure time while at sea. On land, the hourglass gained popularity due to its inexpensive nature. The oldest known hourglass belongs to the British Museum in London.

In its most basic design, the hourglass is two bulbs of glass in which granules can travel between a small opening in the center. Once all the granules have reached the bottom, the hour is over. It's commonly believed that the granules are composed of sand, but in some cases they may be composed of powdered marble, lead, or even eggshells. Depending on the size, hourglasses could represent different measures of time ranging from minutes to multiple hours. When Ferdinand Magellan made his famous trip around the world, he used eighteen hourglasses per ship to keep records of progress.

How Does the Hourglass Measure Time?

Steps to Constructing Your Own Hourglass 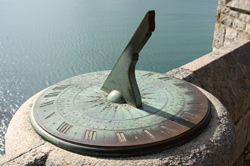 Ancient sundial in Cornwall, England.
One of the earliest measurements of time, the sundial was created to track the progress of the sun across the sky. In early civilizations, the most notable proof of time passing was the passing of day to night to day. It seemed only natural that the sun would be used to tell the passage of hours throughout the day. The sundial was used as a way for early peoples to track seasonal changes, planting seasons, and harvests in order to sustain life.

The earliest sundial was constructed in 1500 BC, in Egypt. It was a vertical sundial, made in the shape of an L, using the shadow cast by the sun to track the progression of time. The L shape wasn't the only form of sundial used throughout history. The object used to cast the shadow, known as the gnomon, could be any thin rod or straight edged object. Many variations on the design could alter the gnomon to be horizontal or vertical, fixed or moveable, and designed for beauty. The surfaces receiving the shadows could also differ depending on desire of design. The most commonly used surfaces are flat planes, however one will also find sundials in half spheres, cones, and other cylindrical shapes.

The advancement in the reliability and regularization of the sundial can be credited to Hellenistic North African astronomers. The Romans grew fond of this method of time for use in organizing the day. As a result ancient Roman cities grew flush with sundials. They became the most commonly used time devices in Medieval Europe, as they were less technologically difficult to operate than their water clock counterparts.

The Science of Sundials

Astronomy of the Sundial 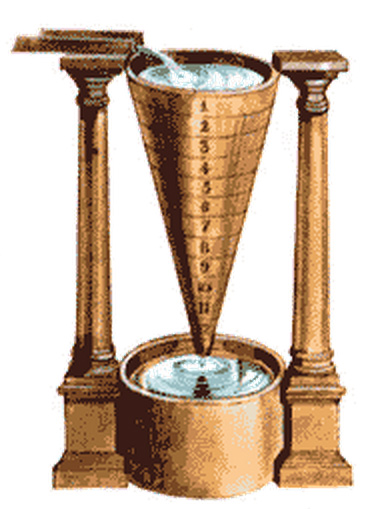 A waterclock can be used instead of a sundial, when there is no sun.
The water clock, also known as a clepsydra, came into existence as a way to track hours on cloudy days and during the night. It is not known the exact date or who was responsible for the invention, but historians believe its existence originated in BC time during the 16th century. As the counterpart to the sundial, it is one of the oldest mechanisms for keeping time. It is believed that the early Egyptians invented the water clock, although the Greeks are credited with its advancement. Many historians believe that the apparent inventor of the compass, Duke Chan, used a water clock to measure time in the year 1130.

In its simplest form, the water clock was created based on the notion that a certain amount of water would always take the same amount of time to fall from one container to another. However, there are many limitations with this method as such a fragile model could easily be manipulated by outside elements, both manmade and natural. As technology advanced, different civilizations made adjustments to the water clock in order to approve accuracy. The Greco-Roman culture is credited with altering the feedback mechanism, in order to fix the problem of diminishing water flow. Greek horologist Ctesibius is credited with inventing the most important advancement to the water clock when he created gears and a dial that would automatically measure the time as days passed throughout the year. 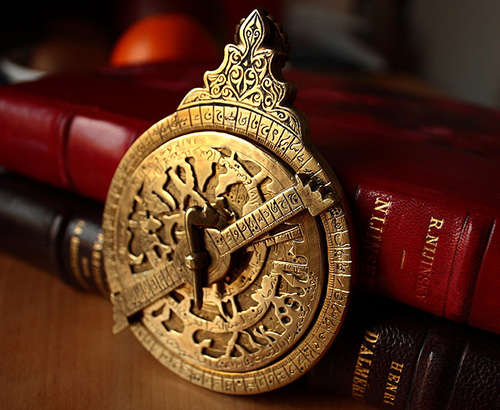 The astrolabe was invented as early as 150 BC by Hellenistic Greek astronomer Hipparchus.

Astronomers, astrologers, and navigators used astrolabes as an accurate measure of time based on readings off of celestial objects in the sky. Using an astrolabe, one could make more accurate predictions of time and location on the globe based on the movements of the planets, stars, sun and moon. The invention of the earliest astrolabe is credited to Hellenistic Greek astronomer Hipparchus in 150 BC. It is often described as one of the earliest uses of a mathematical object, and is compared to an analog calculator. They were used mainly throughout the early Greek culture.

The basic design of the astrolabe is a complex design containing a deep disk, called the mater. The mater holds more flat plates referred to as tympans. Each tympan is constructed for certain latitudes and is engraved with circles to represent the horizon. The rete operates as a star chart. It is a framework above the mater that functions to project the ecliptic plane with pointers to indicate the positioning of the brightest stars in the sky. Once the rete has completed one rotation, a full day has passed.