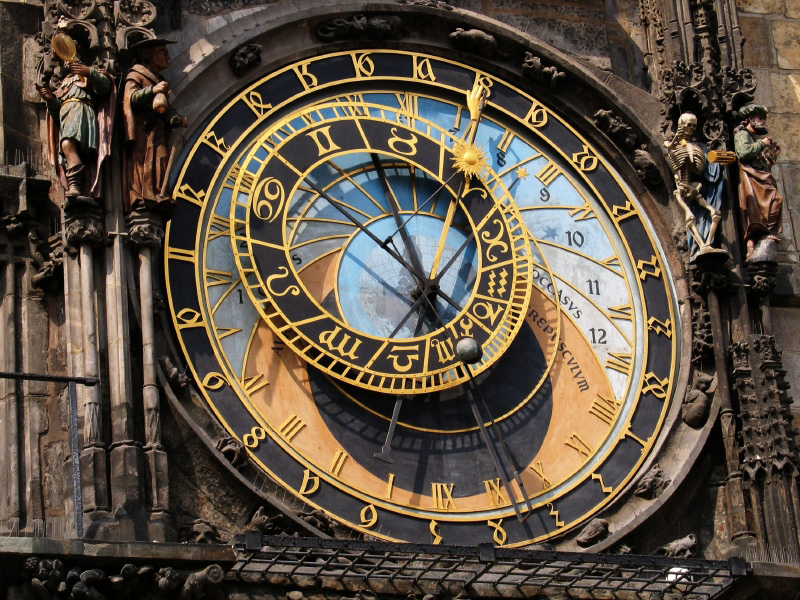 An astronomical clock called Orloj at the city hall on the Old Town Square in Prague, Czech republic.The oldest part of the clock, the mechanical clock and astronomical dial, dates back to 1410.

A clock is an instrument used to measure and indicate time. It is derived from the Latin word “clocca” meaning bell. The current day clock has arrived after a whole lot of transformations and improvements while the actual clock dates back to around the fourteenth century.

Measuring time started with just following the sun, and classification was based on its intensity as just morning, noon, afternoon, evening or night. Slowly, the sundial was built to tell the time in smaller parts. It consisted of a vertical stick on a horizontal surface with markings and the length and position of the shadows indicating the time of the day. This was used for nearly 2,000 years despite not being very accurate.

In the 1400’s the water clock (Clepsydra) was invented. It consisted of two containers of water, one placed at a higher level than the other. Water went from the higher to the lower container through a pipe and these containers had markings on them to indicate the time. This became very popular as it worked even at night, and the clouds could not affect it. Through a period of time, it evolved to become more accurate. The Greeks improved on this and created date, months, and year.

The first known clock was the spring powered clock. This spring powered clock did not work properly and was inaccurate. Initial clocks did not contain minute or seconds. In 1577, Jost Burgi invented the minute hand, a significant contribution though it was not appreciated initially due to the problems it caused. Christian Huygens invented the pendulum clock in 1656, and it became popular very soon.

The mechanism behind the pendulum is simple. The pendulum swings left to right causing a wheel inside it to turn. This wheel controls the minute and hour hand on the face of the clock. Pendulum clocks had some issues because they had to be restarted every now and then. However, they were instrumental in changing the way time was measured. Soon, batteries were installed and resolved any issues in the pendulum clock. Next were the Quartz Crystal clocks which use a combination of voltage and pressure, causing the quartz to vibrate at a constant speed. These vibrations move the minute and hour hand. Quartz Crystal clocks are accurate and cost effective. This is the mechanism in the clocks and watches today.

The clock needs a primary power source to run. It can be a battery, power line or a suspended weight in mechanical clocks. All clocks use oscillation to calculate time whether it’s a swinging pendulum or a vibrating quartz crystal. This oscillator moves at a particular speed over and over again. It is attached to a controller which maintains the movement of the oscillator, replacing lost energy, and converts the oscillation into a series of pulses to measure time. Counter chains are used to convert these pulse readings into seconds, minutes, and hours. Then, there’s the indicator that displays the time in a format that can be understood.

The main types are digital, analog, and auditory clocks. Digital Clocks display digits which can be in the twelve hour am/pm format or twenty four hour format. They use a LCD, LED or VFD display. Analog clocks have a face plate with numbers and dials or hands that move to indicate the time. It is normally circular in shape and contains numbers one to twelve indicating twelve hours of sixty minutes. Some clocks have a seconds hand to indicate the sixty seconds in each minute. An auditory or talking clock as it is known is especially helpful to those who are unable to see time. It can be a simple ringing of bells or numbers mentioned in a spoken language. Clocks can be further classified into different types depending on their mechanism, function and style. Some examples are: